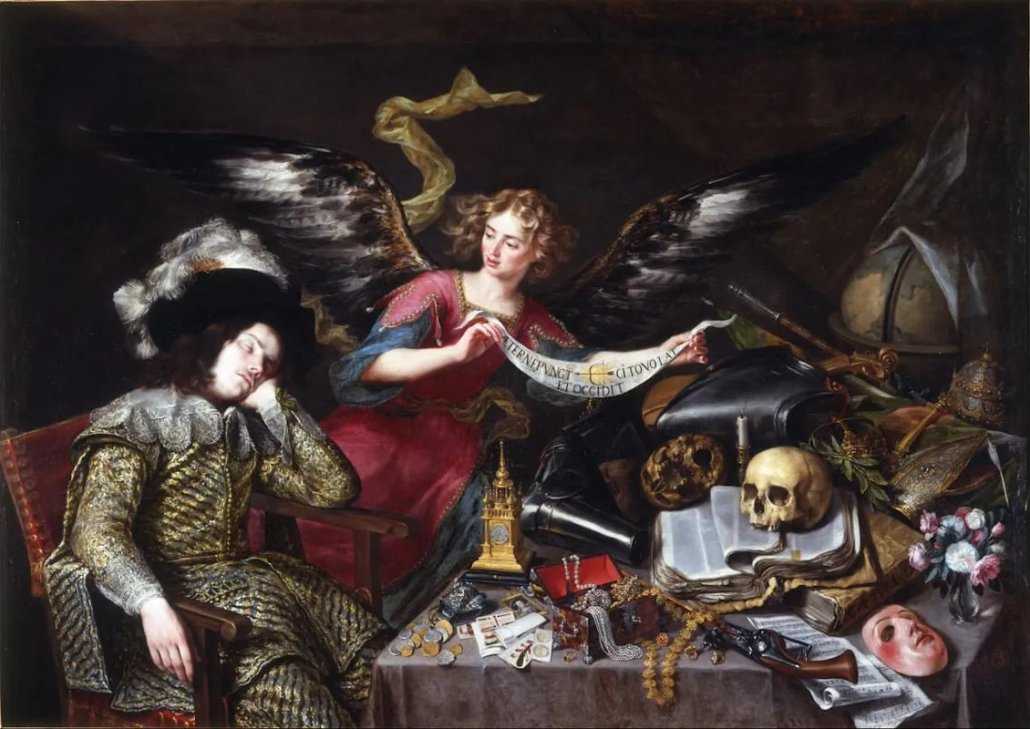 Note: this article was originally written by Manon Welles for aristocratsofthesoul.com on February 2016 (see reference). Because the article is very good and the original website is inaccessible, I decided to republish this article on here. I have attempted to contact the author directly prior to publishing this article but got no answers.

Dream interpretation using the methods of Carl Jung is fairly simple, doesn’t require a ton of knowledge about mythology or archetypes, and can be one of the most valuable tools in path of self-discovery. In the book Inner Work, Robert Johnson details a concise four-step process for Jungian dream interpretation. All it takes is the willingness to question yourself and to journal about dream associations.

Our unconscious mind speaks to us in the language of symbols. Johnson likens a dream to a screen onto which the unconscious projects its inner drama in symbolic form. But to understand what our unconscious mind is trying to tell us, we have to learn to decode its symbols. Then these hidden aspects of ourselves will start to be revealed and understood.

Johnson’s four-step approach for Jungian dream interpretation is: 1. Make associations related to the dream’s symbolism; 2. Connect the images of the dream to inner aspects of the self; 3. Decide the correct interpretation of the dream; and 4. Cement the new knowledge with a ritual.

This step is best done by sitting down with a pen and paper. Write down each image of the dream—the blue cat, childhood home, a strange phrase uttered—and then write down what associations come up for you with that image. For example, the color blue may bring up feelings of calm, the sea, the sky, or of “feeling blue.” Pay attention to colloquialisms, such as a dream of being stuck in literal mud could be saying “you’re stuck” in a relationship, job, or attitude. A dream of walking on a bridge would have different meanings for different people—some would associate it with an exciting trek, others with having a panic attack due to a fear of heights. All of this is uncoding the symbols of the unconscious.

It can be hard to figure out the meaning of the dream symbol. Jung says one of the associations will eventually “click.” Pick the association that seems to have a lot of energy or challenge you in some way. This is a great practice for developing intuition.

Of particular importance is encountering an archetype in a dream. Johnson describes this as follows:

The dream that contains an archetype often has a mythical quality. Instead of scenes that seem like the everyday world, the dream takes you to a place that feels ancient, from another time, or like a fairy tale. . . . Another sign is that things are bigger than life or smaller than life. Archetypes may also present themselves as otherwordly animals: talking lions, griffins, dragons, flying horses.

Once you identify an archetype, look it up to learn more about it, especially in mythology or religion. However, it’s important to remember Jung’s words that “No dream symbol can be separated from the individual who dreams it” (qtd. on 63). It’s not enough to just recognize the archetype and the meaning it has in myth—you have to figure out why it’s in your dream and what it means for your own life. 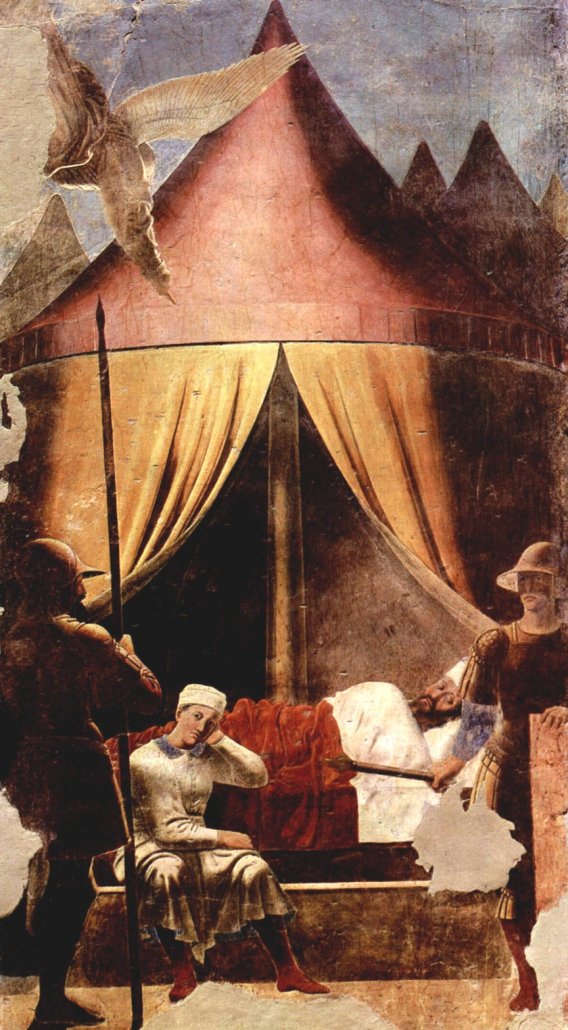 Piero della Francesca, from “The Dream of Constantine”

With the associations you’ve made in Step 1, you now start to identify which part of your inner self they relate to. Johnson says this step is the single most important principle in dream work, “the one that determines whether you will find the wisdom in your dreams” (69).

This step can trip people up since it’s easy to assume that when a spouse, parent, or friend appears in a dream, that the dream is referring to that person. But “in practice, it usually isn’t so.” They are a symbol for a quality in the dreamer (69). In Jungian dream interpretation, the dream is viewed as an inward journey, not an outward one, and everything in the dream refers to a part of the inner self:

This inner dynamic that is represented by a person could be several things. It could be a certain trait that you have in common with the dream figure. The angry woman in your dream could be you as an angry person, but you don’t admit it to yourself. Dreams tend to speak in extremes, so chances are it will be a very exaggerated trait. The dream figure also could represent a common behavioral pattern that you share with that figure. Ask yourself how the qualities of the dream figure are active in your own life, and what those characteristics represent. A place in a dream could be a place inside you, or a certain stance, or a goal your inner growth is moving toward.

Some of the most common associations are derived from Jung’s work, such as archetypes, the anima, animus, shadow, and self. Archetypes can be recognized because of their intensity or otherworldly quality. The shadow—the aspect of ourselves that is still hidden in our unconscious—is usually represented by a figure of the same sex. A man’s anima is represented as a woman, and a woman’s animus as a male. Johnson says not to jump to conclusions about a figure fitting neatly into one of these categories though, as not every person in a dream will be the shadow or anima/ animus: “Usually some very small detail in the dream will tell us which way to take the symbol” (80). 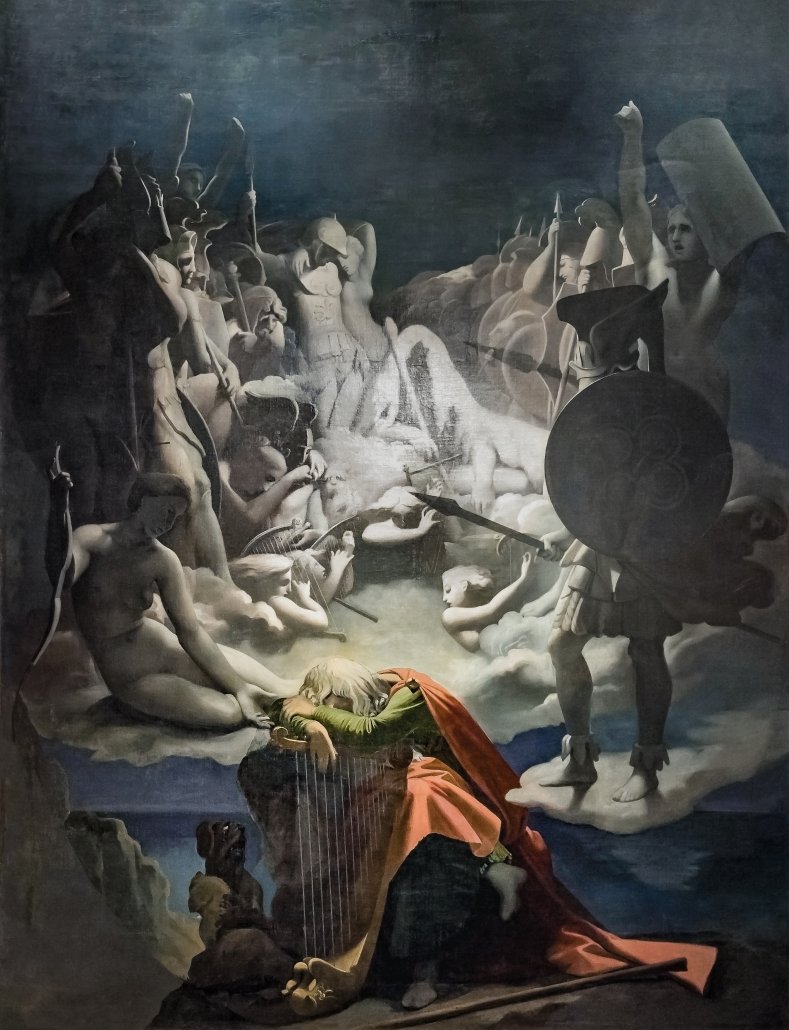 Jean-Auguste-Dominique Ingres, from “The Dream of Ossian “

This step involves asking yourself questions, such as “what is the central message this dream is trying to communicate?” or “what is this dream telling me to do?” Write down all of your possible answers.

It can be difficult to decide which interpretation is the correct one. Johnson gives four principles for validating a dream interpretation:

Choosing the dream interpretation that’s the best fit for your ego may backfire, as your unconscious mind will keep trying to tell you the message until it sinks in:

The unconscious pushes us into one suffering after another one impossible mess after another; until we are finally willing to wake up, see that it is we who are choosing these impossible paths, and take responsibility for our own decisions.

Jung said that it is exactly where a person feels most frightened and most in pain, that the greatest opportunity for personal growth lies. Going where the discomfort lies is a good rule of thumb for choosing an interpretation. Your unconscious isn’t going to tell you something that you already know.

Step 4: Do a ritual to make the dream concrete 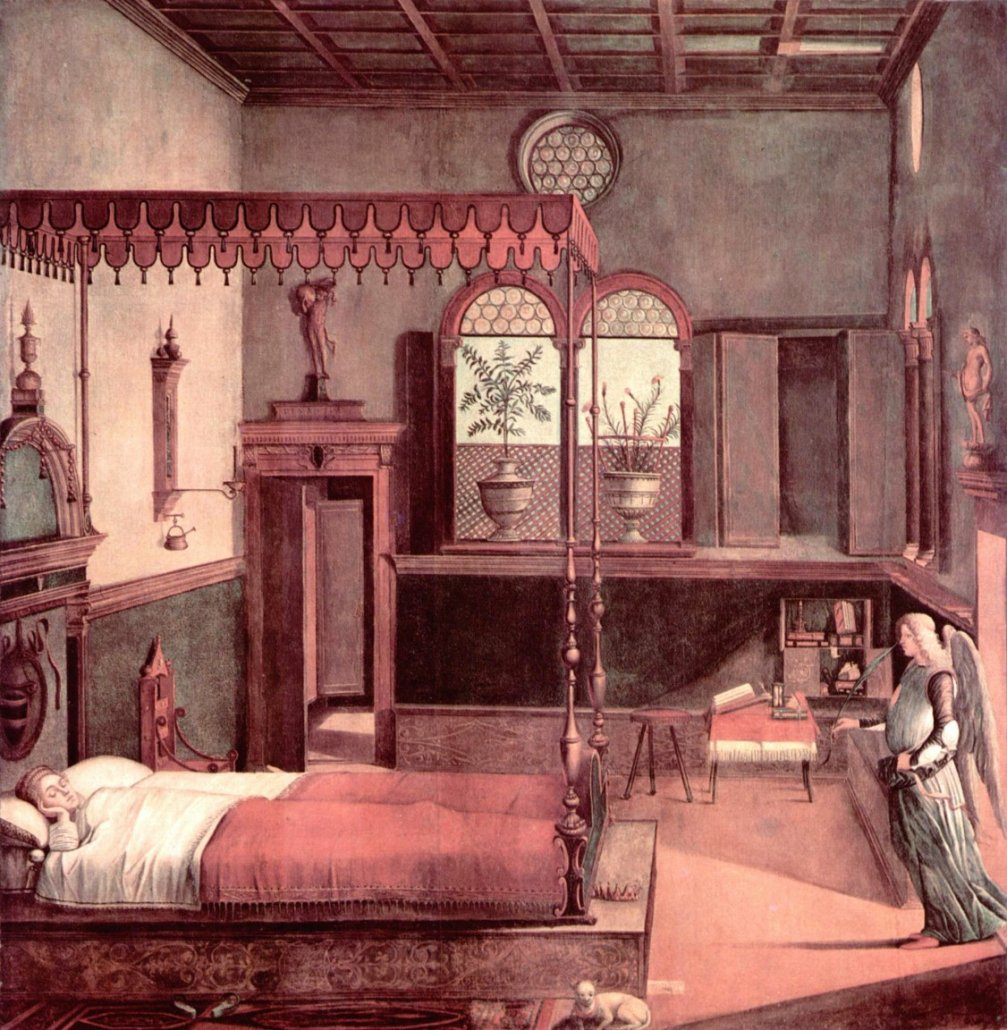 Vittore Carpaccio, from “The Dream of St. Ursula”

Johnson stresses that it’s important to do something physical once you interpret your dream “because it helps you to integrate your dream experience into your conscious, waking life” (97). Your dream interpretation should have been revelatory, and this step involves doing something to show that you’ve taken the message of the dream seriously and are planning to do something about it.

The ritual takes the dream, which you’ve already pulled from the unconscious to your conscious mind, and grounds it in the physical world. This will help you internalize it and to take some small step towards implementing the advice of the dream.

The ritual itself can be something small. Johnson gives the example of someone who dream says they need to be more aware of their feelings. The ritual could be as simple as sending a card to someone or dropping by to visit someone. Another example of a ritual is writing a letter to the part of yourself that the dream says needs to change, and then post it to yourself. Keep in mind that the ritual need not be symbolic of the entire change, but simply of initiating that change. Whatever you choose, the ritual will have an effect on the unconscious: Rituals are a way of approaching the inner world that have existed since the beginnings of the human race.

Johnson’s description of ritual is good to keep in mind, whether for a dream ritual or Ceremonial Magick working:

In summary, there are a few things to remember for basic Jungian dream
interpretation:

Pick up a copy of Johnson’s Inner Work for more on these methods, and an in-depth look at common symbolism found in dreams.

The Movement of Life