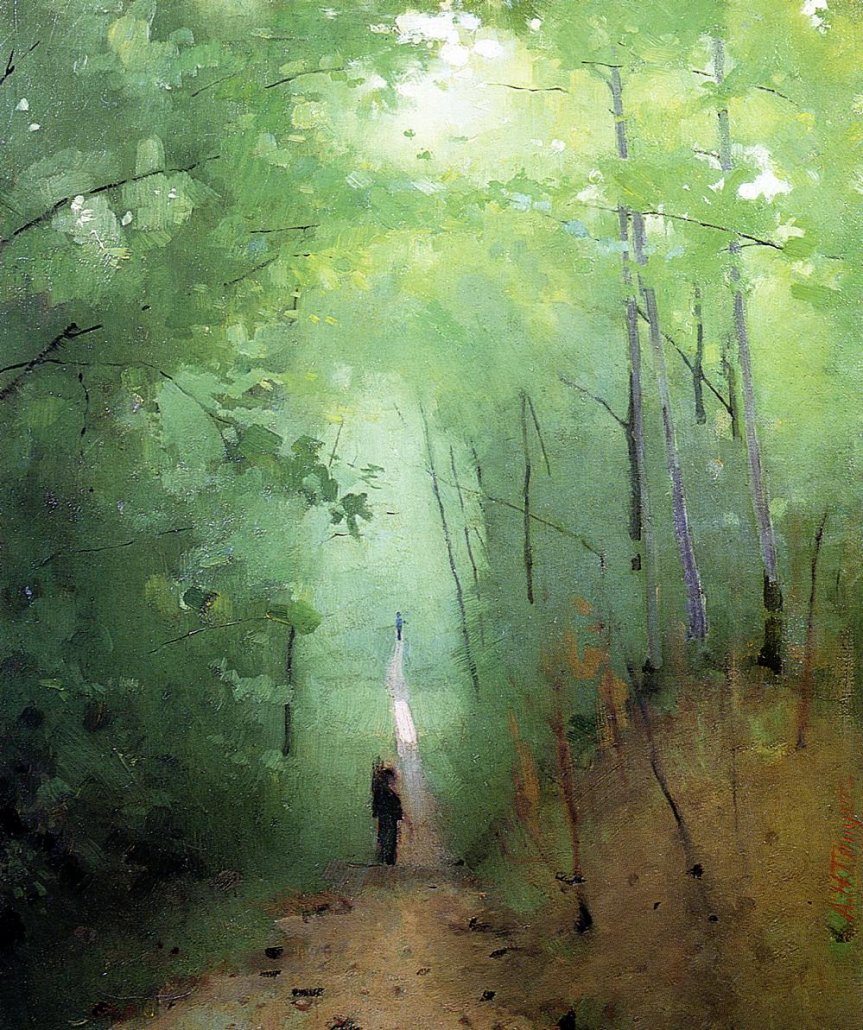 As I was reading Marie-Lousie von Franz’s “C. G. Jung, His Myth in Our Time“, I encountered the following idea:

The first dream which one can recall from childhood often sets forth in symbolic form, as Jung later remarked, the essence of an entire life, or of the first part of life. It reflects, so to speak, a piece of the “inner fate” into which the individual was born. (ibid., p.23)

She goes on for the rest of the chapter to detail Jung’s first dream, which is an encounter with a subterranean god-like being:

“The vicarage stood quite alone near Laufen castle, and there was a big meadow stretching back from the sexton’s farm. In the dream I was in this meadow. Suddenly I discovered a dark, rectangular, stone-lined hole in the ground. I had never seen it before. I ran forward curiously and peered down into it. Then I saw a stone stairway leading down. Hesitantly and fearfully, I descended. At the bottom was a doorway with a round arch, closed off by a green curtain. It was a big, heavy curtain of worked stuff like brocade, and it looked very sumptuous. Curious to see what might be hidden behind, I pushed it aside. I saw before me in the dim light a rectangular chamber about thirty feet long. The ceiling was arched and of hewn stone. The floor was laid with flagstones, and in the center a red carpet ran from the entrance to a low platform. On this platform stood a wonderfully rich golden throne…. Something was standing on it which I thought at first was a tree trunk twelve to fifteen feet high and about one and a half to two feet thick. It was a huge thing, reaching almost to the ceiling. But it was of a curious composition: it was made of skin and naked flesh and no hair. On the very top of the head was a single eye, gazing motionlessly upward.
It was fairly light in the room, although there were no windows and no apparent source of light. Above the head, however, was an aura of brightness. The thing did not move, yet I had the feeling that it might at any moment crawl off the throne like a worm and creep toward me. I was paralyzed with terror. At that moment I heard from outside and above me my mother’s voice. She called out, “Yes, just look at him. That is the man-eater!” That intensified my terror still more, and I awoke sweating and scared to death” (ibid.)

After a long amplification of some of its elements, this dream, she concludes, announces a transformation happening in the collective psyche that was hinted at in alchemy. It’s “a new image of God and man, an image which brings the official Christian image of God and man into a new fullness and greater completeness. This new image of God appears in Jung’s first dream of the underground phallic god-king, awaiting in this hidden form its eventual resurrection. This secret stamped Jung’s whole life and it became his fate.” (ibid., p.35)

The above dream has far-reaching implications but is beside the point of this article.

The point is the underlying idea found in the first quote: “The first dream which one can recall from childhood often sets forth in symbolic form, as Jung later remarked1, the essence of an entire life, or of the first part of life. It reflects, so to speak, a piece of the “inner fate” into which the individual was born.”

Reading this put me in an introspective mood. What if that was true? What if one’s first remembered dream would give a symbolic outline of a part of one’s fate? What was my first dream? Do I remember it? And what did it mean?
1 Cf. his seminars on children’s dreams, given at the Federal Institute of Technology (ETH) in Zurich, 1936/37, 1938/39 and 1939/40.

The first dream that I can recall happened when I was around 5 or 6 years old. The setting of the dream was based on the TV series Iznogoud.

Iznogoud (notice the pun) tells the story of a Grand Vizier who spends his life scheming to overthrow the Caliph. As he claims, he wants to be “calife à la place du calife” (“I want to be Caliph instead of the Caliph”). Every episode then tells the story of a complex scheme of Iznogoud trying to overtake the Caliphe which fails either because of some extraordinary luck of the Caliphe or because of the plan backfiring on Iznogoud. The video below will give an idea of the content of the show.

While the TV show is a comedy for kids, the dream I had was horrifying.

I went down a well using a ladder with a group of people. At the bottom of the ladder, we found an underground Arabic city. Every single person living there was decapitated and blood was pouring down their neck. I remember my sight stopping on a single headless body, it was Iznogoud.

This dream was terrifying as a young kid and I never knew what to do with it.

The main symbol is witnessing the result of a mass beheading. Recently, I discussed the symbolism of beheading in the movie the Green Knight. The conclusion was that beheading is a separation of the mind from the body, a necessary dissociation in establishing a supraordinate spiritual position (the unio mentalis). The union of spirit and soul, of ego and self, has to be achieved at the price of ganging up against the body before reuniting with it.

But why did the dream choose the setting of Iznogoud? My main association with Iznogoud is the recurring catchphrase “I want to be Caliph instead of the Caliph”. This can be understood as the psychological danger of the identification of the ego with the self. When the ego tries to usurp the position of the self, this leads to a very dangerous inflation typically followed by a life-threatening downfall.

Is this dream foreshadowing something personal yet to come? Or, given the number of psychological difficulties I already had (see my burnout story here), has it already happened? Finally, as children are closer to the collective unconscious, does this dream have a transpersonal dimension?

As of writing this (September 2021), I can only vouch for the second option but I don’t feel it has exhausted the meaning of the dream. Something is missing.

Looking for more associations, a dream I had in October 2020 came to mind. The full dream and analysis can be found here. The relevant part is the following:

I started reading a book, which was by Jung. As I was reading, Jung appeared next to me and said, “Forget about everything we don’t know. The only thing we know is that the Son is going to be sacrificed by the Father.”

I first read “the Son is going to be sacrificed by the Father” as a future ego-death but, despite the dream portraying this as an absolute certainty, it has not happened to me. Thus these questions remain: is this sacrifice of the Son by the Father (of the ego by the self) the same as the mass decapitation of my childhood dream? Is this a personal future event or will this happen to the collective?

A quarter century later, I am still unsure what to do with this dream.

The elements I have gathered for analysis are not conclusive enough. If I ever gain some deeper insight, I will come back to this article.

For the moment, I wanted to put this out in the open as an encouragement for others to go through a similar process of recalling, writing down, and attempting an analysis of the first childhood dream. Might yours be fruitful.Note: the day I finished this article, someone posted on Reddit the following nightmare:

“My first nigthmare i can recollect
For context I had seen an advertisment for the movie Tim Burton’s The Nightmare Before Christmas on a VHS tape and this nigthmare occured. Dreamt this in 95 or 96, at age four or five.

Jack Skellington is standing on the moon, next to him there is a large sabel cannon. As cartoonish as this is the ammunition is decapitated human heads. The heads are distinctive in their realism in contrast to Jack and the cannon. The heads roll down the barrel while i watch from the side where I can see them stop in a loading chamber. His intent is to shoot the heads down towards earth. And i awoke.

I remember the unsettling and graphic nature of the heads as very frightening.” (source)

The similarity of his dream is astonishing and its symbolism appears to be complementary. Sadly, I can’t come up with an articulated understanding of this dream so I have to leave it at that.

The Green Knight – A Psychological Analysis

Working With Complexes: A Practical Alternative
Scroll to top